Warmest thanks to Pete Wenman for setting up this blog on behalf of the Faversham club. The hope is that, once we get established, there will be input from both our own members and from visitors to the site.
Anyway, I thought I would post a few of my experiments and discoveries when scratch-building and carrying out major conversions (which are my principal modelling interests). Over the years, I have produced various drawings, diagrams, jigs and templates to assist my attempts at portraying the human figure and these seem to provide a good starting point and will, I hope, be of help to some modellers.
I'm sure that very many modellers are fully aware of the artist's method of establishing the correct proportions of a figure by measuring it in "heads", but if anyone is unfamiliar with the concept, I'll try and provide a fairly basic and brief explanation. It simply means that you can measure all the parts of the body and the distance between parts, using the head as your basic unit. This technique of measuring the figure in units of the head goes back at least to the Greeks although the appreciation of what constitutes an ideal figure has changed throughout the ages. For instance, in ancient times, the ‘heroic’ figure was frequently portrayed as being nine heads high. However, in more recent times the standard is generally accepted as being about seven and a half or eight heads in height. A figure that is seven and a half heads high depicts a normal or slightly compact figure while the ‘eight head’ figure is more elegant and, perhaps, slightly idealised. 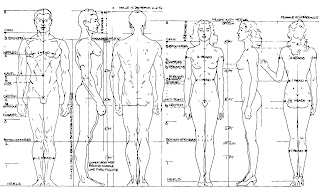 If you want to provide yourself with a figure diagram to work by, go to your local library or bookshop and have a look at books on drawing the human figure. In those you will almost certainly find a suitable drawing that sets out the proportions of the figure based on this theory which you can copy for your own use. I reproduce herewith a drawing I produced in this way more than twenty-five years ago, and I still find it invaluable. It also illustrates exactly what I mean about the relation of the head to the entire figure. The male figure measures eight heads in height and, if you study it closely, you will see that the major divisions are marked on the left-hand side. So, working downwards, the first division (head) is from the top of the head to the chin, the next from chin to the level of the nipples, the third is from nipples to navel, the fourth (and centre point) from navel to crotch, the fifth from crotch to slightly lower than half way down the thigh, the next reaches from there to just below the knee, the seventh is half way down the lower leg and the eighth is, of course, to the bottom of the feet. It’s worth noting that the male figure is about two and one third heads wide and the space between the nipples measure about one head’s width. Now, obviously, if you walk down the high street, you are immediately aware that the variations in the shape of the figure are almost infinite, but this method of constructing a figure does provide a pretty accurate measure to something that bears more than a passing resemblance to a human being and is a good starting point.
You can also, of course, immediately work out an accurate measurement of the size of the head, whatever scale you are working at. If, say, your figure is meant to be six feet tall, then just divide 6 feet (72 inches) by 8 and you will see that the head measures 9 inches high. You can then use the head as a measure for all or any part of the body such as the length of the upper or lower arm etc. You will also note, when studying the drawing, that there are slight variations in the proportions of the male and female figure but, hopefully, I don’t need to explain that to you!
I think that is probably more than enough for my first post but I shall be happy to try and answer any questions and will, over the coming weeks, provide what I hope will be more useful information on the subject.
John Regan
Posted by johnofospringe at 22:11